Older laying birds are still a valuable asset, as long as they are managed for performance and productivity. Eggshell quality is one of the elements that, without proper management, can quickly deteriorate. It is therefore essential that the egg producer takes into account all the necessary elements for the formation of high-quality eggs.

The eggshell, in a nutshell

The eggshell represents ten percent of the entire egg, by weight[i]. For instance, a 60-gram egg contains approximately 6 g of shell. Out of this particular shell, approximately 95% is CaCO3[ii], with a total of 2.3 g of Calcium (Ca).

But where does the calcium in the eggshell come from?

Eggshell quality is often negatively correlated to bone strength[iii], most probably because body calcium is redirected to the shell to the detriment of the bones and the other way around. This impacts the long-term health of the skeleton; however, modern laying hens can maintain shell quality while preserving bone mineralization[iv].

Approximately 60 to 75% of shell Ca is derived directly from the diet on shell-forming days[v]. This means that the greater the proportion of Ca coming directly from the feed or water additives, the better the eggshell quality can be. Therefore, the factors that can improve shell quality will also reduce the need to mobilize bone Ca and can also help to maintain skeletal health.

In old laying birds, generally after peak production, the ability to deposit Ca onto the shell remains relatively constant[vi], so an increase in egg size after peak production will tend to result in reduced shell quality. Dietary requirements for Ca tend to increase and those for phosphorus (P) tend to decrease as hens age.

Also, as hens age, the efficiency of Ca metabolism decreases[vii]. Increases in dietary Ca and a widening of the Ca:available P ratio are intended to counter this issue. Excess dietary P can also reduce shell quality[viii].

Because of its importance in Ca and P absorption from the gut, adequate dietary vitamin D activity must also be provided[ix]. Feeding of the vitamin D metabolite 25-OH vitamin D3 can help to maintain skeletal and shell quality in high-producing laying hens[x].

Ca metabolism is a complex game

Ca metabolism is regulated by various hormones such as calcitonin, 1,25-dihydroxyvitamin D3 (calcitriol), and parathyroid hormone. Estrogen, androgens, and prostaglandins also appear to have an important role in avian Ca metabolism. 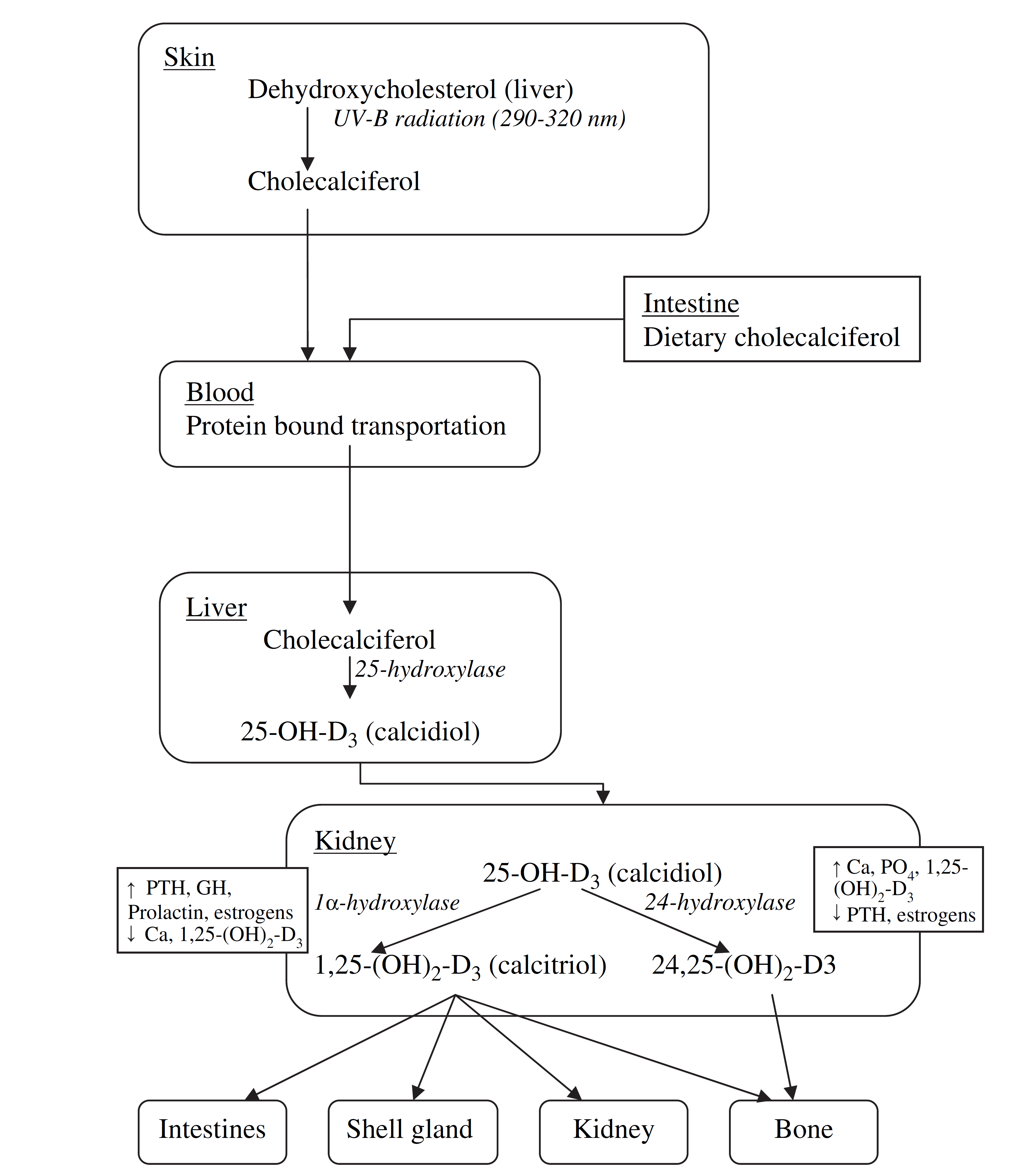 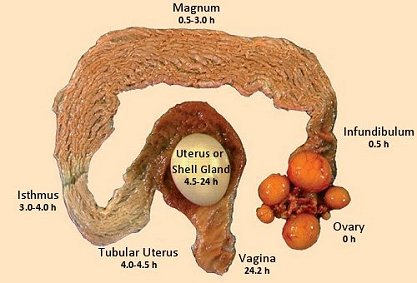 A hen ovulates approximately 15 to 75 minutes following oviposition[xi], and the ovum takes approximately 4.25 hours to reach the shell gland[xii], at which point calcification takes approximately 17 hours[xiii]. Hens generally lay eggs in the morning and early in the afternoon[xiv]. The hen can use the Ca and P made available through diet to recover medullary bone losses during the next 5 hours after oviposition.

Once the ovum reaches the shell gland, the demand for calcium naturally increases greatly as eggshell formation progresses. The highest eggshell mineral accretion takes place 5 – 15 hours after the egg enters the shell gland[xv], which normally happens later in the afternoon and during the night preceding egg laying.

In many cases, the source of eggshell problems can be detected by recognizing the specific markers. For instance, cracked, soft-shelled or corrugated eggs can be caused by saline water, or the impact of mycotoxins; shell-les eggs can be caused by improper amounts of Ca, P, Mn or vitamin D3, as well as by infectious bronchitis or Newcastle disease IB. However, among the main causes of eggshell quality issues is heat stress.

Under heat stress, birds will also tend to decrease their feed intake during the day to reduce diet-induced thermogenesis. Calcium intake is therefore also reduced, and shell quality decreases as a consequence.

At midnight, when temperatures are typically cooler, the addition of one to two hours of light can help the birds increase feed consumption[xvii]. Midnight feeding can also have the benefit of providing a dietary source of Ca to support eggshell formation during the night and reduce reliance on bone reserves[xviii].

Along with Calcium, some micro-minerals can also influence eggshell quality. Zinc, Manganese and Copper act as cofactors of enzymes involved in the mineralization process during eggshell formation. Although European Union legislation restricts the use of high levels of these minerals, several studies in layers indicate increased egg shell resistance by increasing the dietary concentrations of microminerals. Using organic forms of Zinc, Manganese and Copper appears to be an alternative way to increase the absorption of these minerals, as organic forms appear to be more digestible than inorganic forms. Considering the high cost of organic minerals, a mix of organic and inorganic forms of critical minerals could be a better option.

If a hen is fed a diet containing only a small-particle Ca sources, such as finely ground limestone, the intestine will be deprived of a source of Ca during the night, when demand for Ca is highest. At that point, the hen will be entirely reliant on bone Ca to support eggshell formation. A combination of Ca supplementation through water additives can be a good alternative as readily available Ca to the hen to support high Ca requirements during the late afternoon and through the night. Liquid Ca additives also offer further precise and user-friendly    application.

Stimuvital IP (formerly Shellimprover) is a liquid nutritional additive for laying hens, supporting the quality of eggshells and bone health. It contains a cocktail of Ca and vitamins whose benefits in laying birds are well proven through field studies, existing literature, and years of market experience.

22,500 layer birds were split into two equal-size groups, one of which (11250 birds) was supplemented with Stimuvital IP for 3 days every two weeks, starting from age 53rd to 63rd week. Improvements in eggshell thickness and strength could be noticed after the application of Shellimprover. Egg weight was consistent in Stimuvital IP -supplemented birds.3 days every fortnight by using the Easy@ system. In total, the 11250 birds received (2 (feed lines) x 3 (times per days) x 265ml x 3 (days) x 6 (week 53, 55, 57, 59, 61, 63) 28620mll of Shellim-prover Liquid. 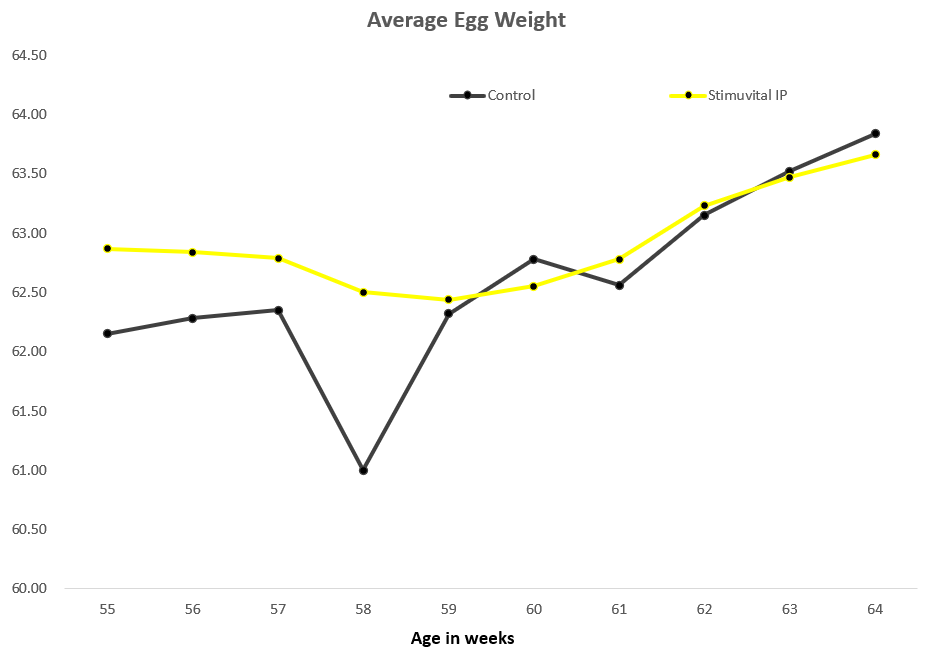 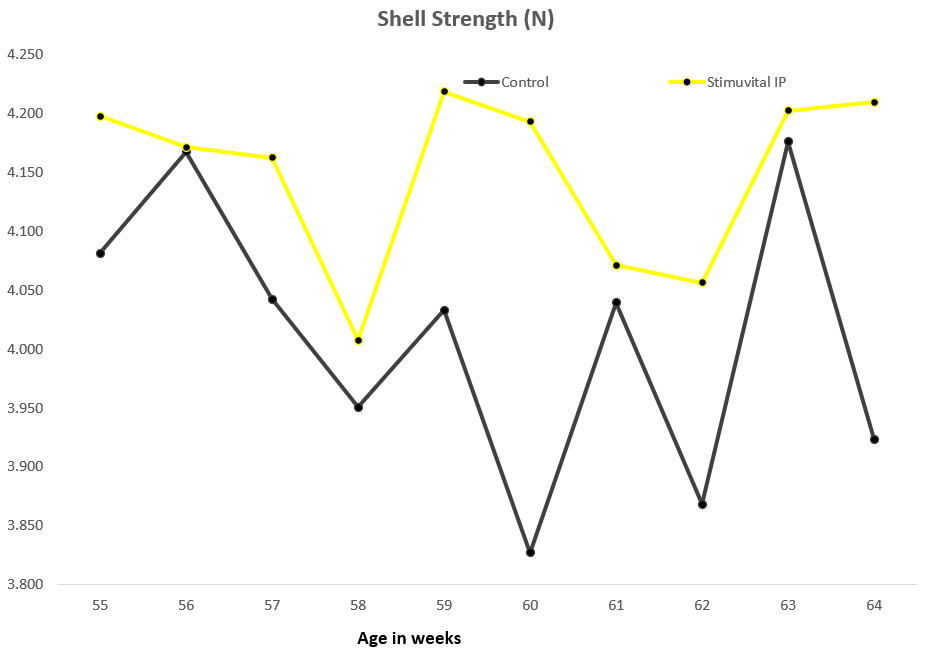 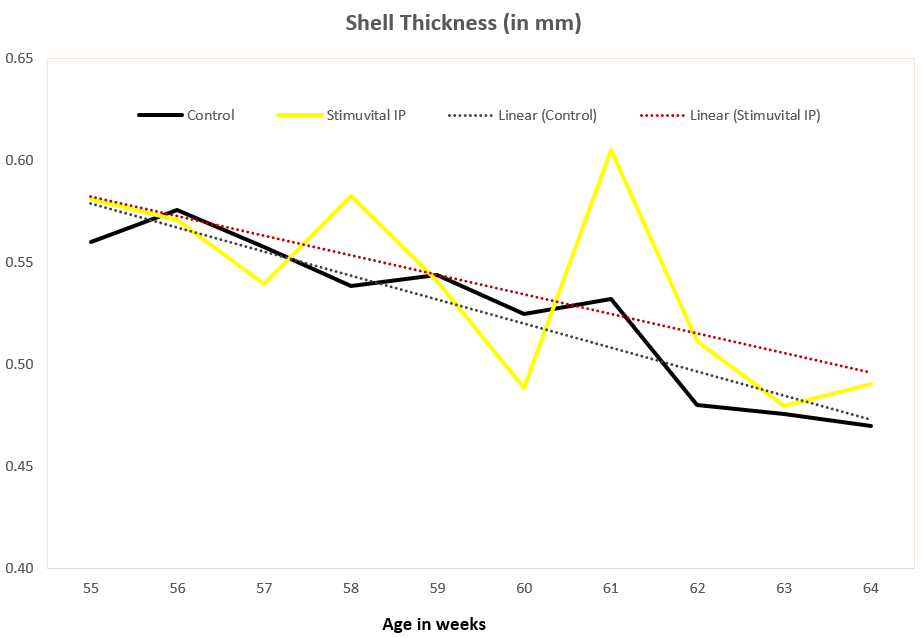 The field trial was carried out on a commercial layer farm. A control group and Stimuvital IP (Shellimprover) group had 50,000 birds each. Stimuvital IP was supplemented for 3 days every two weeks, starting from age 57th to 62nd week. The Stimuvital IP supplementation improved eggshell quality, including eggshell thickness, laying rate, and number of saleable eggs during the trial period. 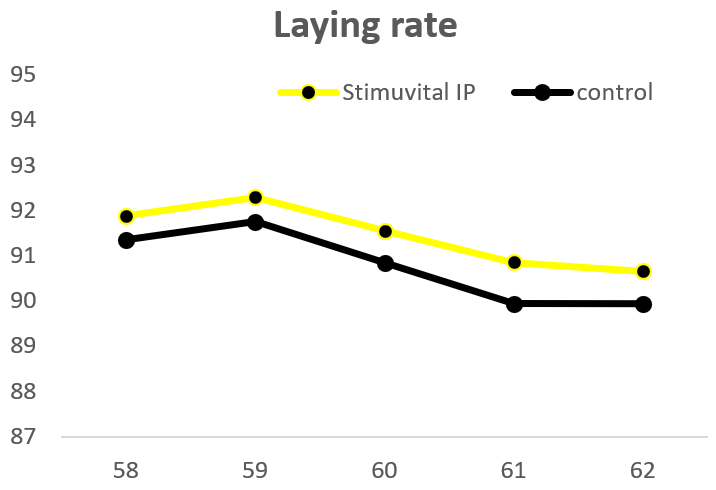 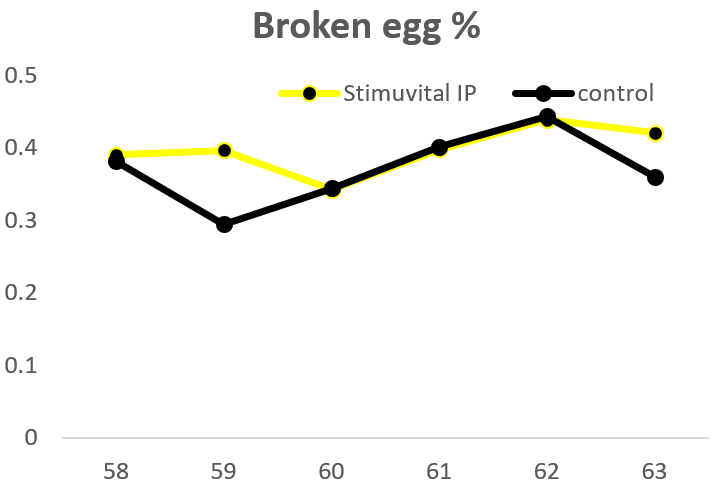 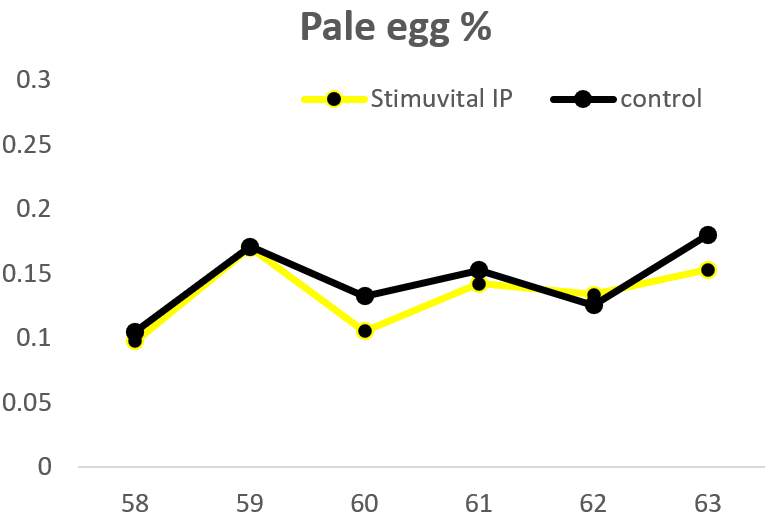 Ca concentration in the blood is controlled by many interacting feedback loops that involve Ca, phosphate, PTH, vitamin D3, and calcitonin. Supplementation of Vitamin D3 can help maintain skeletal and shell quality in high-producing laying hens[xxiv].

Stimuvital IP offers an essential cocktail that caters to the additional requirements of Ca and vitamins in older laying birds. It thus supports Ca metabolism and eggshell quality. And, in the end, better eggshell quality reduces broken egg percentage and optimizes the number of salable eggs and profitability for layer producers.

Full references are available upon request. 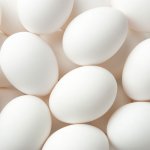