From day 1, young animals are confronted with the pathogens of their environment. Feed and feed ingredients also significantly increase exposure to microbes. This article will look closely at three critical bacteria in poultry production. The trials of phytomolecules-based products shared in this article prove the unique benefit of lowering harmful pathogens while simultaneously sparing health-promoting microbes. The targeted selection of the blend’s phytomolecules contributes to this distinctive mode of action.

E. coli can be valuable… and dangerous

E.coli are commensal bacteria that usually belong to the natural gut flora. However, there are several E. coli strains that, due to certain virulence factors, can cause disease. These bacteria are called avian pathogenic E. coli or APEC. The disease ‘Colibacillosis’ can occur in different forms:

Since some of the E. coli strains can sometimes be transmitted vertically to offspring, it is crucial to keep the pathogenic pressure in the parent generation as low as possible (Mc Dougal, 2018).

Due to the, mostly in young chicks, common use of antibiotics, E. coli strains resistant to ß-lactam antibiotics (ESBL-producing E. coli) or fluoroquinolones (e.g., Enrofloxacin) have developed.

Clostridium perfringens: the cause of necrotic enteritis

Clostridium perfringens belong to the normal caecal flora. However, its overgrowth in the intestine is linked to necrotic enteritis, causing estimated losses of up to USD 6 billion yearly in global poultry production, which corresponds to USD 0.0625 per bird (Wade and Keyburn, 2015). Necrotic enteritis can occur in a clinical and a subclinical form.

In the case of clinical necrotic enteritis, the birds suffer from diarrhea resulting in wet litter and increased flock mortality of up to 1 % per day (Ducatelle and Van Immerseel, 2010). Mortality rates sometimes sum up to 50 % (Van der Sluis, 2013). If birds die without clinical signs, it may be peracute necrotic enteritis.

The subclinical version, however, is more critical. Due to the lack of symptoms, it often remains undetected and, therefore, not treated. Mainly through the impaired utilization of feed, representing 65-75 % of the total costs in broiler production, subclinical necrotic enteritis permanently impacts production efficiency (Heinzl et al., 2020).

Salmonella enterica: a zoonosis relevant for birds and humans

Most concerning in (non-typhoid) salmonellosis is that it can be transferred to humans. The transmission occurs via direct contact with an infected animal, consuming contaminated animal products such as meat or eggs, contact with infected vectors (insects or pets) or contaminated equipment, or cross-contamination in the kitchen. Frozen or raw chicken products, as well as the eggs, are frequent causes of animal-origin Salmonella infections in humans.

Salmonella is the more critical the younger the birds. If the hatching eggs already carry salmonellae, the hatchability dwindles. During their first weeks of life, infected chicks show higher mortality and systemic infections.

Adult animals usually do not die from salmonellosis; often, the infection remains unnoticed. During an acute salmonella outbreak, the animals might show weakness and diarrhea. They lose weight, resulting in decreased egg production in layers.

To check if phytomolecules-based products can effectively influence gut flora, a product specially designed for gut health (Ventar D) was tested for its antimicrobial activity. Additionally, the extent to which the same blend impacted the beneficial bacteria, such as Lactobacilli, was evaluated.

The in vitro study using the agar dilution method was conducted at a German laboratory.

The bacteria (Salmonella typhimurium and ESBL-producing E. coli) stored at -80°C were reactivated by cultivating them on Agar Mueller Hinton overnight. After this incubation, some colonies were picked and suspended in 1 ml 0.9% NaCl solution. 100 µl of the suspension were pipetted and evenly spread (plate spread technique) on new Agar Mueller Hinton containing different concentrations of a phytomolecules-based product (Ventar D): 0 µg/mL – control; 500 µg/mL; 900 µg/mL; 1.250 µg/mL and 2.500 µg/mL. After 16-20 h incubation at 37°C, growth was evaluated. The results can be seen in pictures 1 and 2: 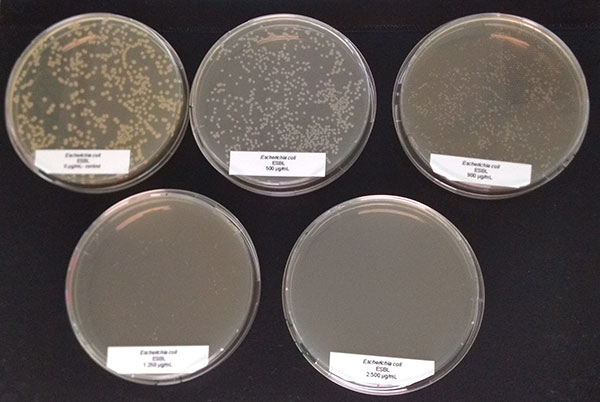 E. coli colonies exposed to 900 µg/mL of Ventar D’s phytogenic formulation were smaller than the control colonies. At 1250 µg/mL, fewer colonies were detected, and at 2500 µg/mL, growth couldn’t be seen anymore.

The salmonella colonies showed a similar picture; however, the reduction could be seen from a concentration of 1.250 µg/ml of Ventar D onwards (picture 2). 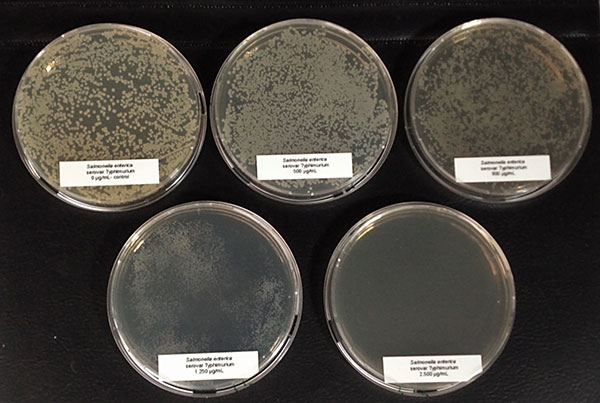 The results are shown in figures 3a-d. 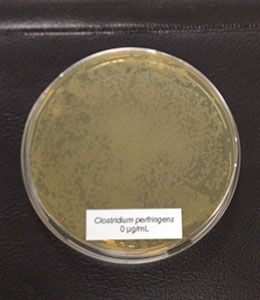 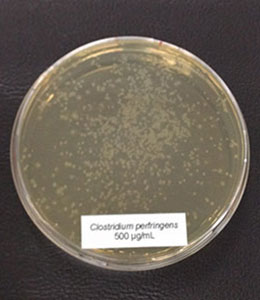 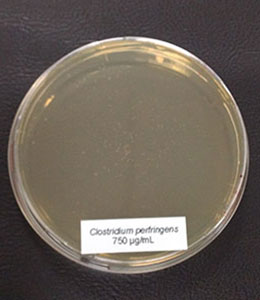 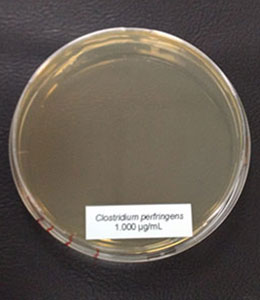 In contrast to Clostridium, the Lactobacilli showed a different picture: only at the higher concentration (1250 µg/ml of Ventar D), Lactobacillus plantarum and Lactobacillus agilis S73 showed a slight growth reduction (figures 4 and 5). 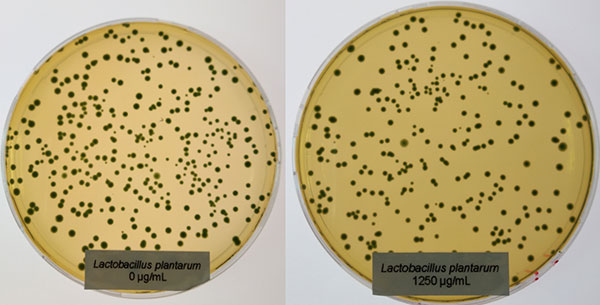 The experiments show that even at lower concentrations, phytomolecules impair the growth of harmful bacteria while sparing the beneficial ones. Phytomolecule-based products can be regarded as a valuable tool for controlling relevant pathogens in poultry and influencing the microflora composition in a positive way.

The resulting better gut health is the best precondition to reducing antibiotics in animal production. 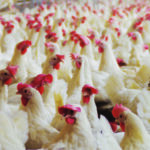 Salmonella in poultry: What are the most effective natural solutions?4th March 2022

A complex battlefield: mycotoxins in the gastrointestinal tract3rd December 2020 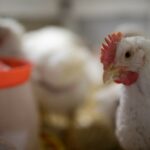 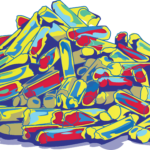 Encapsulation: How a modern phytogenic feed additive makes all the difference18th October 2021