For newborn pigs there are often a host of different challenges – think of crushing or contamination of the farrowing pen.
For the last problem, solutions exist. A dietary approach can help to relieve pathogenic pressure through sow manure.

Pathogens during the first days
E. coli is well known as one of the main responsible pathogens for pre-weaning diarrhoea. And although it belongs to the normal intestinal flora of pigs, part of the different E. coli strains are pathogenic. E. coli cause about 80% of diarrhoeas in piglets and 50% of losses in piglet production. The factors making E. coli pathogenic, the so-called virulence factors include e.g. fimbria to attach to the intestinal wall and the capacity to produce toxins.

Strategy to protect the piglets
In order to maximise the sow’s performance – measured in piglets weaned per year – it is crucial to provide the best possible conditions to the piglets. Therefore the reduction of the pathogenic pressure in the farrowing unit ranks first. Cleaning of the pen is a way to get rid of germs like E. coli and Clostridium species, the most important pathogens during the first days. This should be completed by an effective gut health management in sow and piglets. For this purpose natural ingredients can be used. Supplying natural and active immune cells, the so called antibodies, has been proven to be quite efficient in supporting gut health. Applied to piglets, immunoglobulins from the egg bind to pathogens within the intestinal tract. They show efficiency in supporting piglets’ performance, decreasing the incidence of diarrhoea, mortality and increasing daily gain.

Trial
In the trial two groups contained eight sows each. The sows of the control group received standard lactation feed, the trial group was also fed standard feed with a supplement containing egg immunoglobulins (Globigen Sow, EW Nutrition, at a dosage of 5 g/sow twice daily) on top during the last ten days before and the first seven days after delivery. The faeces of the sows were obtained by rectal stimulation (in order to get no contamination from the environment) on day 10 before and day 7 after delivery. The amount of colony forming units (CFU) of total E. coli, E. coli O141 and Clostridium perfringens were determined. 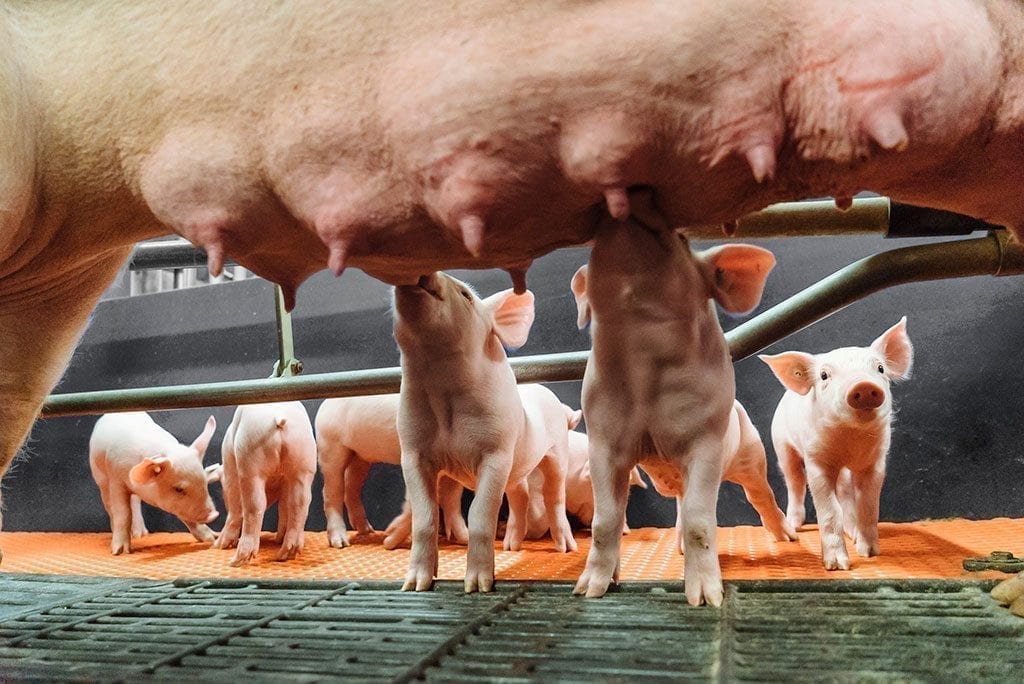 The number of healthy piglets weaned is the most important factor for the calculation of profit in piglet production.

Losses in the farrowing unit normally occur during the first seven days of life as piglets are born with very little protection in the form of immunity. The intake of immunoglobulins from colostrum is therefore of vital importance. Besides cleanliness and special feeding, piglets can be additionally supported by two strategies that mimick the effect of colostrum:
– a direct one, meaning the feeding of immunoglobulins (IgY from eggs) to piglets that would support the immune system in the gut or
– an indirect one, meaning a supply of IgY to the sow to keep the pathogenic pressure in the farrowing unit as low as possible.

Piglets are born with no immune protection and very low energy reserves
It is well known that piglets are physiologically immature at birth. Their energy reserves are very low with only 1 – 2% body fat comprising mainly of structural and subcutaneous fat. Therefore, in the first hours of life they rely on the glucose supply from glycogen from the liver as their main energy source. However, this will only cover their needs for a few hours.
Due to the construction of the sow’s placenta, a transfer of immunoglobulins (antibodies) within the uterus is not possible. This means that piglets are born with practically no immune protection and depend on the immediate intake of immunoglobulins from colostrum. The immunoglobulins can be absorbed in the gastrointestinal tract and immediately transferred into the bloodstream – but also only for a short time. The absorption ability of the piglets starts to decrease soon after birth and ends after 24 to 36 hours.

Strategy 1: Making the farrowing unit as safe as possible
The piglets’ environment should be warm to prevent hypoglycaemia. Piglets looking for heat close to the sow can also get crushed. Since the temperature needs of the sow and piglets are different, a piglet nest with a special heat lamp is recommended. Furthermore, the farrowing unit should be clean. Due to their low immune status, piglets are susceptible to common pathogens such as E. coli, Clostridium perfringens, and rotavirus that can all lead to diarrhoea.

Most pathogens can be traced to those found in the sow’s faeces. To keep this amount as low as possible, different measures can be taken:
– A vaccination increases the immune defences of the sow. The antibodies fight against the pathogens so that less “functioning” pathogens are excreted.
– Feeding of probiotics increases the number of good bacteria like Lactobacilli and Bifidobacteria competing with the pathogens for binding sites and nutrients.
– Administration of egg immunoglobulins, which bind to the pathogens within the gastrointestinal tract and make them harmless. These pathogen-immunoglobulin-complexes can be ingested by the piglets without any danger.

Strategy 2: Supporting the piglets with immunoglobulins
The aim here is to strengthen the local immunity in the gastrointestinal tract by increasing the amount of immunoglobulins (Ig). As already mentioned, the intake of sow colostrum is of vital importance. With the vaccination of the sow, the content of antibodies in the colostrum can even be enhanced.
An additional measure would be to orally supply the piglets with egg immunoglobulins (IgY). Both classes of immunoglobulins (IgG from mammals, and IgY from birds) can bind to pathogens in the gut, preventing them from binding to the intestinal wall and reducing the incidence of diarrhoea. The difference is in the degree of effectiveness and specificity.

Conclusion
To maximize the number of piglets weaned, it is necessary to support their immune system during the first days of life. Besides good hygiene management, the administration of egg antibodies to the sow will also help reduce the amount of shed pathogens keeping the pathogenic pressure low. The application of egg antibodies directly to the piglets supports their immune system by binding the pathogens in the gut, minimizing the risk of diarrhoea.